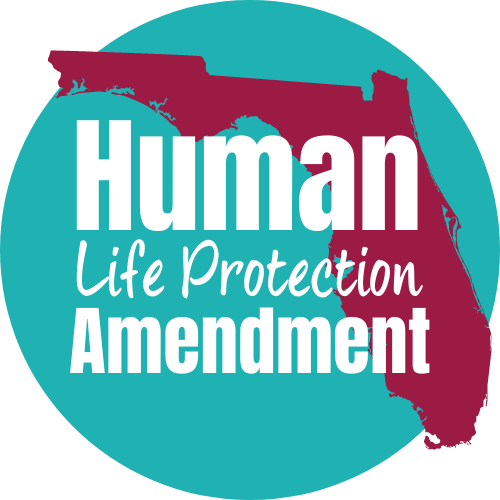 What is the full text of the amendment?

You can click here to read the full text in English.

Where do I mail signed petitions?

Do I have to mail petitions back individually or can I send them in bulk?
You can mail them in bulk to the address above.
How many petitions are needed to get this amendment on the ballot in 2024?
We need 891,589 validated petitions, which equals 8% of the 11,144,855 votes cast in the 2020 presidential election in Florida.
Who is backing this amendment?

This is a grassroots initiative backed by citizens from all over the State of Florida who are passionate about the protection of vulnerable preborn human life.

What if I signed the petition before?
Our current revised petition was approved for circulation on August 12, 2022. All petitions submitted prior to this date have expired, so if this applies to you please print, sign, and send in another one.
How much time do we have?
The final deadline for petitions to be validated is February 1, 2024.
How can I help?

What about pregnancies resulting from cases of rape or incest?
Our amendment does not make any distinction based on manner of conception.

How can I get involved?

The biggest way you can help is to gather signed petitions from registered Florida voters. Ask your friends, family, church, and community members to sign the petition today!

If you’re interested in serving in one of the following capacities, please complete our volunteer form, and one of our team members will get in touch with you soon.

Who can gather signatures for the Human Life Protection Amendment?

Anyone can get petitions signed. Although you must be a registered Florida voter in order to sign the petition, anyone can help gather signatures, regardless of age or voter status.

Simply print copies of the petition, then ask like-minded registered voters in Florida to sign it.

Once completed and signed, petitions can be mailed to the address below:

What are best practices for gathering signed petitions in public?

1. Be friendly, but confident in approaching people.

2. Always ask the individual if they are a registered Florida voter.

3. Ask if they would like to sign a petition. Here are a few suggested questions to lead with:

4. If a voter does not wish to sign a petition, do not attempt to pressure or coerce them to do so. Many will sign without hesitation, and you are there to give them the opportunity to do so.

What do I do if a potential petition signer asks me a question I don’t know the answer to?

Simply ask them to send their questions to admin@HumanLifeFL.com and we will do our best to clarify any questions they might have. We do not expect you to become a subject-matter expert on this amendment in order to gather signatures.

Do I need to complete the volunteer form before I begin collecting signatures?

No, you do not need to complete the volunteer form prior to gathering signatures, although is helpful for us to know who is engaged, so that we can connect you to local team members, as well as provide any resources that you may need.

Will I get paid to collect petitions?

We are utilizing volunteer petition gatherers exclusively, and therefore we are circulating petition form DS-DE 155A.

Yes, we are happy to sign off on volunteer hours for high school students dedicated to gathering signed petitions. Contact admin@HumanLifeFL.com for more information.

Is there a limit to the amount I can contribute?

On July 1, 2021 U.S. District Judge Allen Winsor issued a preliminary injunction blocking the enforcement of Florida Senate Bill 1890. SB 1890 was designed to set $3,000 limits on campaign contributions to committees in support of or opposition to ballot initiatives during signature gathering. It would have taken effect on July 1, 2021 without the injunction.

Judge Winsor wrote that the state “bears the burden of justifying restrictions on political expression by advancing at least ‘a significantly important interest’ that is ‘closely drawn to avoid unnecessary abridgment of associational freedoms.’ Binding decisions from the U.S. Supreme Court and the 5th Circuit (Court of Appeals) applied those principles and concluded that the First Amendment forbids limitations like those SB 1890 imposes.”

As a result, there are currently no contribution limits to ballot measure campaigns in Florida.

Can I contribute by check?

Yes, a check can be made payable to “Protect Human Life Florida” and mailed to the address below.

What is “Protect Human Life Florida”?

“Protect Human Life Florida” is the name of the sponsoring committee for the Human Life Protection Amendment citizen initiative. An individual or group that seeks to sponsor a proposed amendment by initiative must be registered as a political committee with the Division of Elections prior to submission of the proposed initiative.

Is my contribution tax-deductible?

The short answer is no.

A contribution made in support of the Human Life Protection Amendment, either by check, or through the “Donate” link on this website is being made to a political committee registered with the Florida Division of Elections and is not tax-deductible.

Can I contribute more than once?

How will my contribution be used?

There are many expenses associated with a statewide citizen initiative of this magnitude. During the petition gathering phase that ends on February 1, 2024 we have one-time and recurring costs associated with staffing, printing, consulting, communications, administration, shipping, supplies, travel, etc.

Are you paying professional petition circulators?

Nothing in the Election Code prohibits a political committee from paying individuals to collect petitions. We are utilizing volunteer petition gatherers exclusively, however, and therefore we are circulating petition form DS-DE 155A.